As their granddaughter Joy notes in an obituary of John Jacob, “in 1913 the spirit of adventure penetrated the Parmer family.  Father John and mother Lizzie packed up their belongings and their eight living children and moved to West Yellowstone, Montana.  From then until 1917 the Bar N Ranch was under John’s management.”

Certainly life in the west had it’s challenges, particularly without our modern day conveniences.  Keeping a house and just providing food for a family was a lot more physically involved than most people have to do today.  Remember John and Lizzie were accustomed to the city.  We even saw some of the homes they lived in (see previous posts).  They also had lived on a farm in Pennsylvania before moving to Montana.  But I imagine they had no idea what the “Ranch” life would be like when they moved West.

This next photo is one of my all-time favorites.  I love that it catches a moment in time.  Notice Lizzie is wearing her prayer cap, which again has the black tie strings.  The laundry goes through the ringer and falls into the laundry basket, which isn’t much different than some laundry baskets today.  Doesn’t the porch look tidy?  A few items are hung and a few items are tucked under the bench and the rest of the washing items are on the bench.  I wonder what the temperature was like that day….and whether or not the porch was in the sun or on the shady side of the house.

Lizzie do laundry on the porch.  West Yellowstone, Montana

The bucket furthest right says “Swifts.”  At first research, I noticed some Swift Borax brands, so I thought it might be the laundry soap.  But upon further research, it is a bucket for lard.  Could you imagine getting a bucket of lard that big?  Here’s a close up of a Swifts Silverleaf Brand Lard bucket I found online.

I find it interesting that people of that time ate what we call terribly unhealthy food, and they still lived long lives.  Makes you wonder if the bad rap those kinds of fats get has any truth to it.  Reduce, reuse, recycle was a necessity then, not an option like it is today.  Only then, instead of “reduce, reuse, recycle,” it was “Use it up, wear it out, make it do, or do without.”  Some of you may have heard that before.  Lard wasn’t wasted when butchering, but was put to use, and an empty lard bucket wasn’t wasted either, but was put to use.

What drew the family West?  It may have been family.  John Jacob succeeded the Abraham Rote family at the Bar N Ranch.  Abraham Rote was the husband of John Jacob’s sister, Margie Alice. Ted says in his history that the Rote family moved to Montana 6 years previous to 1913.  So it is likely John and Lizzie were persuaded to move West and work for the Bar N.  The Bar N Ranch is still around.  You can stay there for a fee.  The website is  https://bar-n-ranch.com/

The Bar N Ranch was a cattle ranch seven miles west of West Yellowstone, but it was also used for hay that the L.A. Murray Co. freighted into Yellowstone National Park for the work and stage horses.  The Ranch was originally homesteaded by Mattie Canton, the mother-in-law of L.A. Murray.  The Parmers stayed at the Bar N Ranch for three years.  When the Hebgen Dam was built, Hebgen Lake flooded the meadows that were used for Hay.  Without hay for the cattle, the cattle were sold. 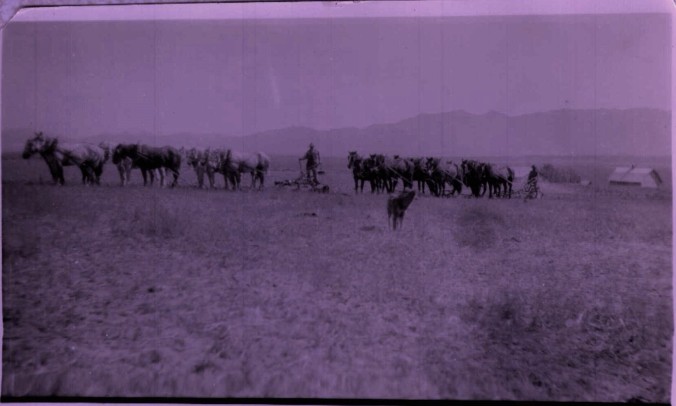 This photo could be of the Bar N Ranch or the Murray Hay Ranch.

John and Lizzie decided to move to Idaho Falls, Idaho, where they stayed until 1920.  During that time, John worked as a butcher.  Here’s a photo in Idaho Falls.  Notice Lizzie has on her prayer cap.

In 1920, the family moved back to the Madison Basin to work at the Murray Hay Ranch.  The hay was sold to the Yellowstone Park Transportation Co Stage Line.

When the buses took over the stage line, there wasn’t as much need for hay. Then John and Lizzie decided to get their own homestead. More about the homestead will be coming up in the next post.

I haven’t found much written record of their life between 1913 and 1920, but I’m grateful for these few photos.  They really help to imagine what life was like for them.